Today I’m excited to share an easy plant-based meal that’s as healthy as it is delicious. Let me start off by saying that I am in no way against traditional pasta. While it has been demonized and many people won’t touch it with a ten foot pole, I think pasta can actually make for a very nutritious meal, and I eat it often. However, there’s no denying that pasta is dense and there are times when I want something a little lighter, especially after the holidays. Enter spaghetti squash! With a mild flavor and pleasant texture, it’s the perfect canvas for a savory tomato sauce. Although it’s very low in calories (under 50 calories per cup), I find spaghetti squash to be very satisfying, particularly in the the cold winter months.

If you’re thinking that spaghetti squash is a pain to prep, I get it (it used to intimidate me and I never bought it), but I assure you it’s easy! You have three options for cooking it: One is to cut the squash in half and bake it, two is to bake the squash whole, and three is to microwave it. Obviously the easiest route is to throw it in the microwave, but I think it’s worth the additional time and effort to bake it in the oven. In terms of baking it whole vs. cut, if you have a suitable knife, I recommend cutting it in half. For a long time I never bothered and always baked it whole, but after some researching, I learned that cutting the squash allows it to caramelize a bit and results in a more “al dente” texture, whereas baking it whole essentially steams it and leaves you with a softer, wetter texture. Either way works just fine with a sauce, but I prefer firmer “noodles.” It also takes less time to cook when cut in half. The one caveat is that you need a very good, large knife, otherwise cutting through the squash will be nearly impossible. I have been there and it wasn’t pretty!

When it comes to tomato sauce, I love adding mushrooms and lentils for a hearty, healthy, and filling combo. Mushrooms are meaty and a good source of antioxidants, and lentils–packed with protein, fiber, and a range of vitamins and minerals–are a nutritional all-star. You could use dry lentils in this recipe and cook them first, but I’m all about easy, so I go with organic canned. Aside from chopping the veggies, there’s not much more to this sauce! Just throw everything in a pan and let it cook. It doesn’t get much easier than that. 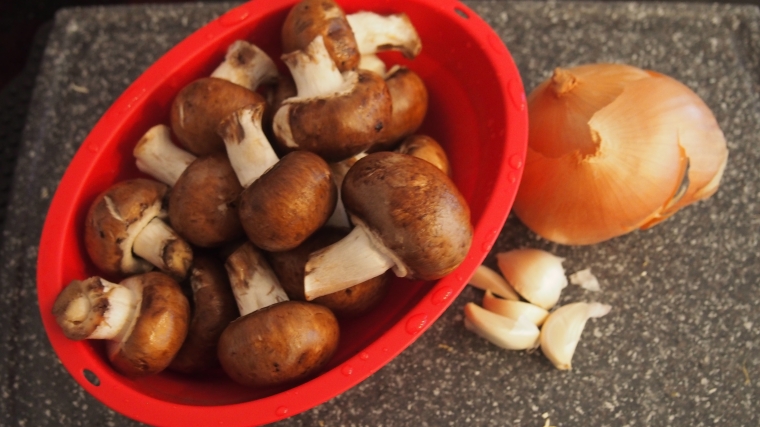